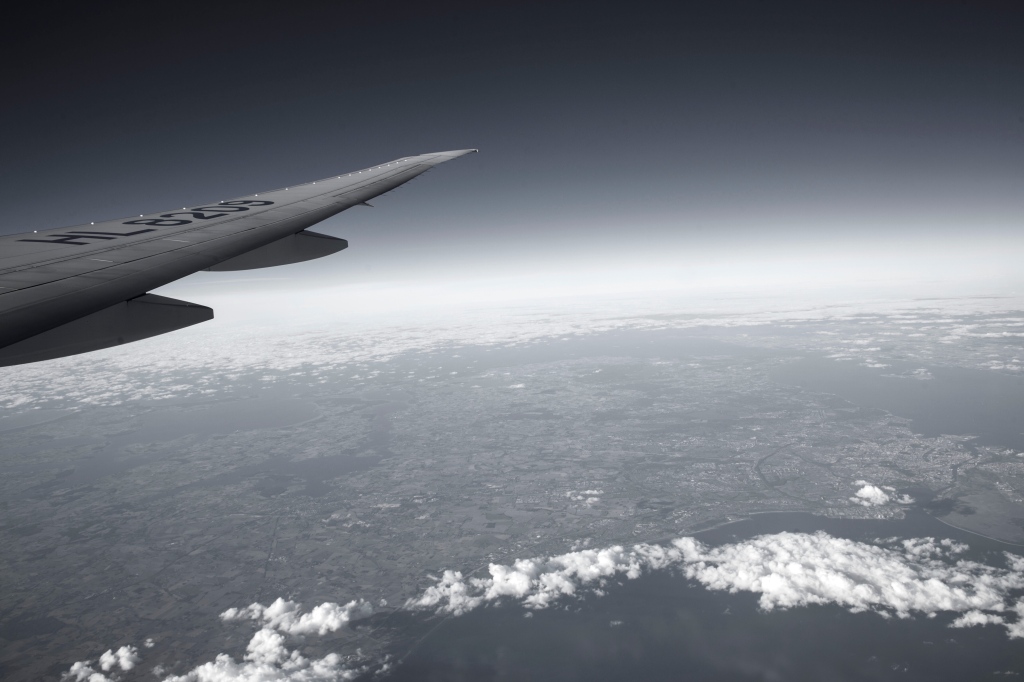 The woman who sat by me on the flight from Accra to Takoradi had never been on a plane. It was obvious when she asked me to help her fasten her seat belt. It became more obvious as the plane ascended like a bird with a bad limp, and a cold hand reached out to touch my knee. I held it. She was shaking as her other hand protected her belly. I gently stroked the back of her palm with my thumb as I made small talk.

“It’s only for a few minutes… You can close your eyes if you want.”

“I have not eaten food today, that’s why my body…” she said, failing to hide her embarrassment.

“Do you live in Takoradi?” I continued, balancing my voice over the noise from the engine.

After a brief moment of silence, she spoke again “I don’t like this thing” she was referring to the plane.

I let go of her hand slowly as the aircraft stabled. She said she wasn’t scared anymore but her tummy was still “turning” her. She circled her right hand over her stomach and started speaking in Fante. When I let her know I didn’t understand, the look of disgust returned as she asked why. I shrugged and told her I would try to learn.

“Learn quick” her face became stern, “otherwise people will talk about you behind your back.”

I decided against making a case for myself. Telling her that I wasn’t Ghanaian would be the easy way out, so I shook my head slowly in understanding, as she gave me golden words of wisdom. Words to live by.

“Don’t give people power to talk about you” she continued.

This wasn’t the first time I was getting advice from a Ghanaian on a plane. The woman who sat next to me during the 6 hour flight from London had also wondered why I didn’t understand Fante. “Do you want people to gossip about you?” she eventually asked. Another woman too, in a store in Accra. I wondered why they all had the same reason. Why they didn’t encourage me to learn Fante so I could get a job, or good deals in the market. I wondered why they never served me with the “you have to be proud of your language and culture” line that is usually dished out to African returnees who insist on using a fork to eat fufu.

Do Ghanaians gossip a lot? I wanted to ask her, but I changed my mind.

She attempted to peep through the window and withdrew immediately, as though she had just seen a bad thing. The thing that put her off flying in the first place. The thing that turned her stomach and ensured that she only travelled by road or never at all. The thing called fear, and the thing she had to conquer because her best friend’s daughter had suddenly died and was being buried the next day.

“Only my friend Faustina can make me climb this craft.”

My light chuckle eased into a thin smile. Firstly because she called an aeroplane a ‘craft’, which is technically correct but weird, and secondly because her friendship clearly meant the world to her.

“See, all here is water water” she stated, matter of factly. “If something happens…” her voice derailed. She rubbed her stomach again.

I wanted to tell her that if something happened over land it could be just as fatal, if not worse, but I didn’t want to be the one who held fear by it’s hand and let it back in through the sealed window.

Somebody stood up in front and staggered towards us, he was heading to the washroom behind. She nudged me with her elbow to ask with her eyes if it was OK for him to stand. The look on her face transitioned from shock to surprise and mild curiosity when I nodded to say it was fine.

We both grew silent and my mind sailed as the plane continued to gather speed. Having flown the route many times, I expected 35 minutes worth of turbulence. Still, I leaned towards the window in a futile attempt to read a book. The hostesses gave out snacks and drinks in a branded carrier bag very quickly, like they were going somewhere immediately after they were done with us. We flew through cauliflower shaped clouds that left me with the insatiable want to reach out and touch one. Below, the water was receding and houses started forming like a distant maze.

As we descended I remembered once, on this same route, I had forgotten to switch off my phone and a Whatsapp message came through. There was the tiniest bar of network on my phone and it disappeared just as quickly as it came. I continued to look at the flat houses below and wondered for the umpteenth time if the plane was indeed going as fast as it says in textbooks.

Suddenly, a phone rang. It wasn’t mine, I was sure. I looked to my left and found my new friend fumbling through her bag. Before I could explain that her phone was supposed to be off, she answered it and shouted “Ello, mpacho… braaa.” She went on and on, adjusting in her seat from side to side, desperate to find a point where the network was stable. “Mpacho wait… hello?” she continued. No shame, no guilt, no contrition, nothing.

Two, three, four of us stared at her with intent, suggesting with our eyes that she couldn’t have her phone on, let alone receive calls. She continued shouting until the line disconnected and she could no longer hear anything. She looked up at us rather strangely, her face innocently questioning why we were all glaring at her.

“My phone was ringing, what was I to do?”

Somebody replied to her in Fante. I heard her make expressions that would be “Really! You don’t mean it?!” had they been said in English. I watched as horror slowly spread across her face like acne. They continued speaking in Fante, as I faced the window and saw the houses zooming in closer. A light chuckle escaped me for the second time. Her ignorance was beautiful, honest, fascinating even. It made me want to cup her face in my palms and move it gently, this way and that.

Tope Owolabi (@eclectictope) is a Nigerian writer and Media enthusiast living in Ghana. She wrote a weekly column on Ynaija.com from 2012-2013. In 2015 she was selected to attend the Farafina Creative Writing Workshop. She is currently working on her first novel.