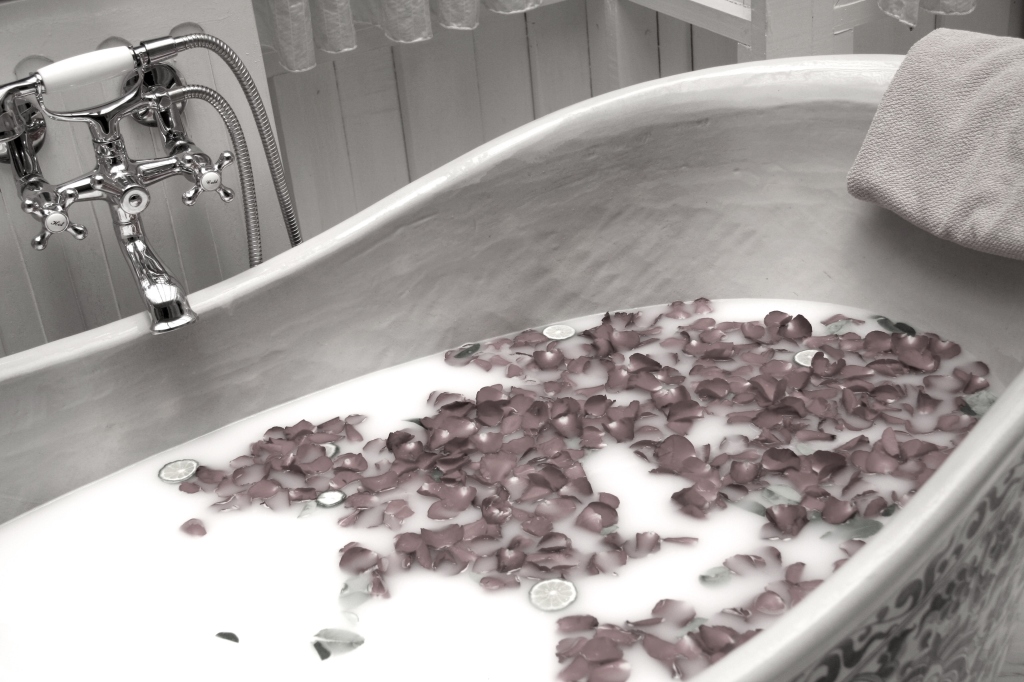 After the first glass of champagne Kelechi told herself she was in good company. She had never dined in an expensive London restaurant as this one, rich with accents, well-off people moving in and out, smelling of money and privilege. Her date, Logan, was smelling of money and privilege too. His watch looked pricey, his suit probably new, not the off-the-rack-type her male colleagues at the office like to pass off as haute couture. This was the real haute couture. Kelechi discovered that her spirits had lifted. Only an hour ago, her mother had rung to poison her mood with her constant talk about marriage. Over the line her voice had reigned: “You will be forty next week. Are you aware of this?”

“You don’t have to remind me,” Kelechi relaxed a fraction in her milk bath. She had sounded aloof, her voice softly echoing off the powder blue walls of the bathroom. Aloofness, because it was a shield to prevent her from breaking down in tears. Unmarried at thirty-nine, she might as well be a nun.

“Not at all,” She liked the way the lights stayed on his eyes, diluting the blueness. Even more striking was the movement of the cutlery in his hands, free and fluid, a man accustomed to fine dining. She did not belong in his world, cushioned with wealth, but yet she could picture them being together, “Thanks for bringing me here.”

“My pleasure, Kelechi.” He called her name with a delicate pride, sloughing off his English accent to show he was making an effort, because she had corrected him on how to pronounce her name when they first met at his elegant Victorian mansion. The hallowed walls had caused her to fall silent, the library delightfully ancient. She had been bamboozled by the polished interior of his life, the frictionless ease with which money could make one appear as though they were floating — a buoyancy. As a fashion editor for Flair magazine, she had gone there to interview him on a feature titled Meet London’s Richest Bachelors. Normally she would have sent her assistant Silva to do the interview, but she couldn’t trust that girl; she was a kleptomaniac and would rob his house, and Logan would be none the wiser.

“This is Giuliana Rancic’s favourite restaurant whenever she comes to London,” Kelechi delved into her dessert. They had had Samundari Khazana, a curried dish containing white truffle, Devon crab, Beluga caviar, and a Scottish lobster coated with edible gold. It was hard to believe that it was all in her stomach.

“Who’s that?” Logan reached for his glass.

“Giuliana Rancic,” She could see he genuinely didn’t know who she was talking about, “She’s a celebrity TV presenter.”

“Never heard of her.”

“She has a reality TV show, her own clothing line and wine.”

“Quite an entrepreneur,” Logan took a sip of champagne.

“Like you,” Kelechi smiled, referring to his spontaneous interest in growing his own Ethiopian coffee beans.

He returned her smile, withdrawing the glass from his lips. Then he winced. At first Kelechi thought he was remembering an unpleasant memory, but she was alarmed when he shot out his hand violently, as if to reach for something on the table. Gripping his glass tight enough to make it explode, he let it slip; the glass splintered into pieces as it struck the floor.

He was clutching his chest, eyes wide with terror, the vein in his forehead bulging, a pink zigzag.

“Logan!” Kelechi stepped on shattered glass to get to him. With trembling hands she undid the first two buttons of his pristine-white shirt, and supported his slouched body.

“Somebody help me,” She looked helplessly at the other diners. One woman wearing a delicately-placed vintage hat was dining alone. She watched on, unperturbed by Kelechi’s distress, as though this was an occurrence she saw every day.

Later on, Logan was pronounced dead — a corpse. He had died of sudden cardiac arrest. Sitting at the rear of the ambulance with a blanket draped across her shoulders, Kelechi’s eyes were blurred with tears. The cold night air stung her face and chilled her lungs. She lit a cigarette. A paramedic offered her tea from a thermo flask, but she absently took the cup and gave it to Logan’s chauffeur. And that was when the mist cleared, like fragments of cobwebs so brittle they dissolved away, letting her see where she really was. Even before she opened her eyes she knew something had changed, a shift back to the present. She looked around her. In her flat’s bathroom she still was, the familiar powder blue walls, immersed in her milk-saturated bathtub, yet to go on her date with Logan.

Kelechi recoiled from shock. She stared at her phone with suspicion and put it back to her ear. Her mother’s impatient voice was unmistakable.

“I’m here,” Her voice sounded funny — a curdled alien strangeness. She sat up and cleared her throat.

“Why were you quiet for so long?”

“Anyway I want you to come for brunch on Sunday. I don’t like the fact that I always have to call you to know what’s happening in your life. Your sister is coming too.”

Kelechi didn’t follow; her mind was still wrapped around the vision she had just had. She was worried about Logan’s safety, they would have to reschedule, she decided. She quickly got out of the bathtub, naked and dripping, “I can’t talk right now.”

“Why?” her mother demanded.

“Let me call you back,” Kelechi turned on the shower and tested the water with her free hand.

“You don’t always call back,”

Kelechi hung up. She washed off the milk from her body, grabbed a towel, and dashed into the room. On her bed lay three designer dresses, luckily cut to her size, sent to her as free samples from various fashion houses. In her vision she had worn the black sequin dress, but now she considered it ominous. Besides, she didn’t see the need to look fabulous. So she pounced on her wardrobe and squeezed into skinny jeans, and a T-shirt she had been given as part of a souvenir for attending the launch of some lipstick. She checked the mirror. Her milk-pampered skin was glowing, especially her face. Acquiring kegs of raw goat milk had proved to be worth every penny; it was better than those useless placenta creams.

She jumped when the doorbell rang. As she bolted out of the room, it seemed to her that time was an unstoppable force, inexorably drawing her to bear witness to Logan’s death. Her body produced so much adrenaline that she felt dizzy at the door. Logan’s limousine was stretched out on her street, and morbidly she imagined it as a coffin, black and solid, very capable of transporting the dead. Logan was hiding something at his back, but she already knew what it was.

“Flowers,” he said grandly, revealing a bunch of red roses, “For you.”

Kelechi swivelled him like a toy. She pushed him towards her car and bundled him inside.

“What are you doing? There was a mild amusement in his voice.

“We need to get you to the hospital.”

“You are going to die.” Kelechi reeled in disbelief at the certainty of her words, cold and true.

“Die?” Logan murmured, his face a mask of confusion.

Kelechi sat behind the wheel, removed the roses from his lap and flung it to the back.

“Use your seat belt.” she ordered.

“Jesus Christ,” Logan latched onto the ceiling of the car with one hand.

“Do you have a heart condition?”

Logan was fumbling with his seat belt. “What are you talking about?”

“Never mind,” It dawned on her that Logan was looking startlingly the same, from her vision, every detail intact. What if fate decided to have him die in her car right now? She shuddered at the thought. It would be horrible. She wouldn’t know what to do. She had no medical knowledge whatsoever, except for that one time she had given mouth-to-mouth resuscitation to a white teenage boy at the beach, rescued from drowning. Even then, she hadn’t been completely sure of what she was doing. She wondered if Logan had a will. If he didn’t have one then he was foolish. Thirty minutes later, at City Medical, she forced a reluctant Logan through the door.

“Please examine him,” She called the attention of a nurse, flustered and desperate, “Run some tests if you have to. He doesn’t have much time.”

“This is ridiculous,” Logan turned to the nurse with a smile, “I’m perfectly fine, as you can see. There’s nothing to worry about. You can carry on with your business.”

“Is there a problem here?” the nurse looked bored.

“No,” Logan said, “We are sorry for wasting your time.”

“Don’t listen to him,” Kelechi persisted, “I’d like to see a doctor.”

“Stop it,” Logan forced out, “Just stop it. You are embarrassing yourself.”

The nurse moved into the hallway. When she was out of sight, Logan said, “If you didn’t want to go out with me, you should have said so.”

“How can you say that?” Kelechi felt a hot flush of anger, spreading under her earlobes.

‘”Look at what you are wearing.” Logan pointed out.

“I’m trying to save you.” she said through clenched teeth.

“Save me from what?”

Kelechi wanted to slap him for being obtuse, but then he hadn’t seen what she had experienced.

“You don’t have much time.”

“You keep saying that.”

“Let them examine you.” Kelechi pleaded.

“I’m leaving. Give me a call when you stop acting strange.”

He walked out of the reception, his shoulders decisively set. Kelechi stood for a moment, stunned by her failure, a bile of disappointment settling in her stomach.

At Flair magazine the following morning, walking out of the boardroom after a vapid meeting, Silva tottered up to her and broke the news of Logan’s death from TMZ, her daily Bible.

“I can’t believe he’s dead,” Silva trembled. She had a penchant for drama.

“What killed him?”Antonio came by. He was the art director, a proud Mexican gay man and a die-hard Katy Perry fan.

Silva scrolled through her phone.

“Sudden cardiac arrest, it says here. He was found dead at home,” She gave Kelechi a sharp look, “How did you know?”

Kelechi didn’t respond. She moved over to her desk and sat down. By habit, she pressed a small dollop of hand cream into her hands and rubbed it in. Someone — Silva, it had to be — had slapped a pink Post-It note to the face of her computer, a message from her mother asking Kelechi to call her back. She opened her leather diary instead, full of reminders about margarita meet-ups with friends, Botox injection appointments, spa reservations, and invite-only fashion parties. Slowly she circled next Friday, the eleventh. It was her next date.

Bernard Dayo (@BernardDayo) is a speculative fiction writer and a fashion designer. His first novel, The Year of the Space Mission, is yet to be published and he is currently working on his second.