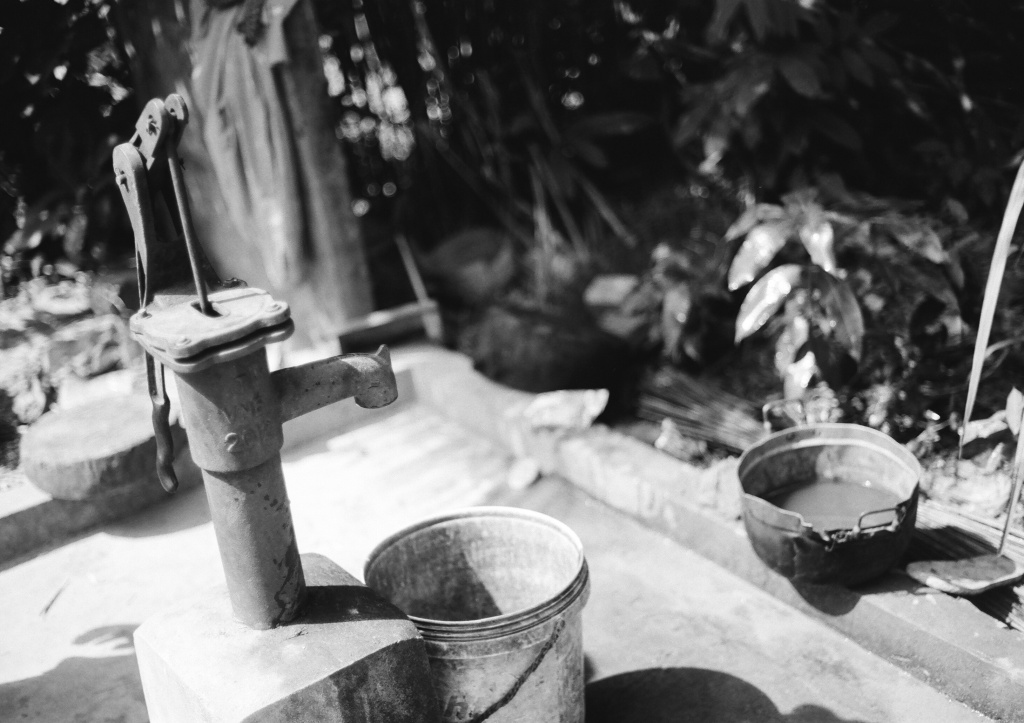 Cool evening breeze wafts lazily through the settlement whipping up red-brown dust and loose dirt that head for people’s eyes. It is this kind of breeze that soothes and sometimes tickles underneath your armpits.

It is on such evenings that men like to sit on their verandahs discussing politics, playing draughts, while downing shots of ogogoro that seem to never finish. The ogogoro makes them laugh boisterously at intervals, punctuating their animated discussions in dramatic fashion.

It is on such evenings that women find cooking forgiving as they can take short intermittent rest trips from the damp hotness of their small general kitchens. The children play on dirt roads from mid-afternoon until the sky turns red and homecoming birds fly across the setting sun in the horizon, forming a picturesque effect.

Girls form circles the size of your mother’s cooking pot; some play Ten-Ten, clapping, chanting and stamping their legs, others draw boxes on sand for Suwe. Boys divide themselves into teams of five and play football along fairly wide plains and paths with makeshift goalposts, stopping momentarily to let vehicles pass.

Four o’ clock and the sun is already hiding under a cloud. One boy is running late for the big football match because he’d been instructed by his mother to clean all the plates before he leaves the yard. This usually isn’t a problem, but today is different. Today the boy has a wager with Azeez, the bully whose legs remind him of the big turning sticks women use to pound Tuwo. They argued two days ago about which of them was the better player, until Ahmed—whose eyes are as wide as stainless plates used to eat garri—suggested that whoever is first to score four goals during today’s match will be crowned the undisputed champion. The boy knows the others will start the match with or without him. He also knows, but will not admit it, that Azeez is a really good player and could have scored up to three goals by the time he arrives.

He rushes his washing, with plates clanging up and down. The yells from his mother each time a pot falls doesn’t make him any more careful. He pours soap water into the bigger pots to soften dried burnt food so he has an excuse to wash them later. When he’s done, he calls to his mother inside, telling her he is through, and that he is going to play ball o! He doesn’t hear her reply but he can see her nod in the eye of his mind as he dashes off.

Half an hour later, the boy and Azeez have already scored three goals apiece. Tackles fly carelessly as both teams try to get the ball to either striker. Suddenly, the boy goes down under a challenge and someone shouts, “Penarity!”

Another retorts, “Toh. Na Lie! Nobody rough am joor! Play on jare!”

“Uban ka!” Retorts the boy. By this time, every other boy has gathered around and cries of Uwar ka and Dan bura ba, rend the air. Soon, some boys find sand being stuffed in their mouths. Someone screams.

Just then another cry is heard in the distance. Above the angry exchanges between the belligerent boys; above the piercing screams of toddlers being forced to take their evening baths; above the rhythmic percussion of knives slicing through vegetables and onto wooden boards; above the shrieking of one girl who just grazed her knee.

This cry is different. In this settlement, everyone knows everyone else’s voice, and everyone has learnt over time to ignore petulant screaming children and their antics. But this is that of an adult and it rings of horrific urgency. For a moment everything careens to a standstill. Then heads turn, one by one as if choreographed.

Gunshots are heard first. Before the roar of engines. Before the sound of grenades exploding in the distance. Before inbound clouds of rising dust are spotted. Before the ground vibrates in protest. Before they see the woman running towards the settlement, arms flailing hopelessly.

This is when life returns to the community. The screams multiply and people run around aimlessly and collide into each other. The boy, still confused wills himself to run but his feet cannot connect with his brain.

Rooted to the spot, he watches chaos unfold until someone yanks him back to reality. It is a woman—his mother.

Ama Udofa (@writivisionmag) believes words are more expensive than the computers they are typed on. He also believes afang soup and ekpang nkukwo are life’s best gifts to taste buds. He spends a quarter of his time cramming biochemical structures, another quarter planning to write, and the other half praying for editors to like him. Bits of his imagination have appeared at Kalahari Review, Brittle Paper, Praxis Magazine, as well as other places on the web and in print.