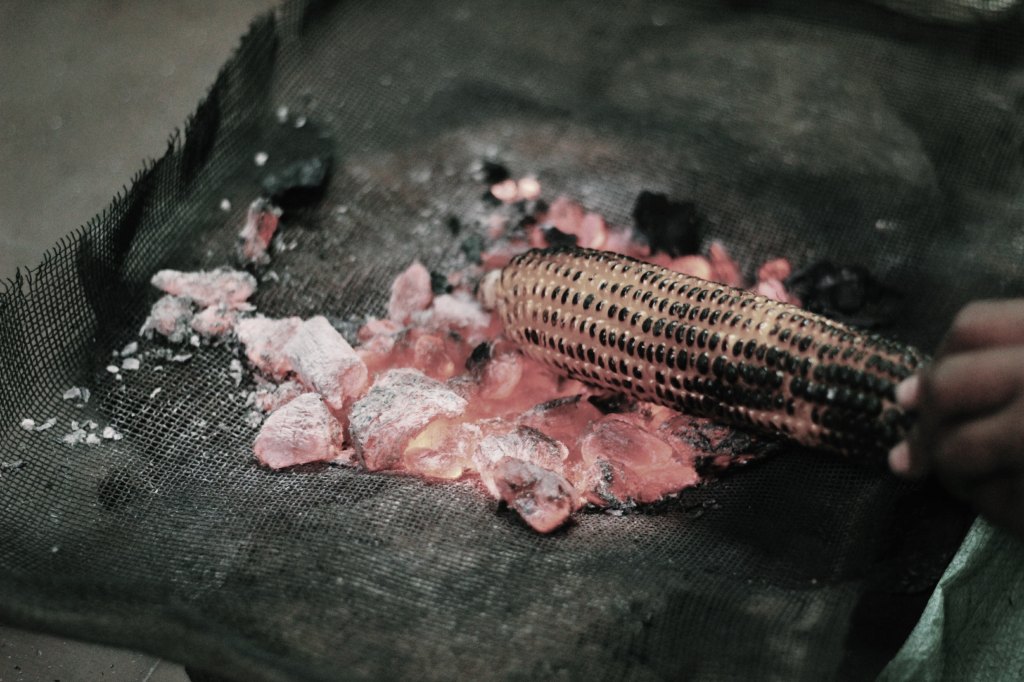 My grandpa’s hair is light and fluffy. There isn’t much of it left. But there’s enough to play with. It tickles the inside of my palm when I rush my hand over it. It looks like candy floss. You can see the pieces of dandruff that have flaked down onto the nape of his neck, the back of his jacket. I don’t point this out, though, ever. Grandpa is kind to me, so I’m kind to him.

He has a deep laugh too, which comes from his belly. I can feel the room move when he laughs. When he laughs I want to go and hug his big stomach and press my face against it and rub it back and forth. He always has a nice smell, Grandpa does. I can’t figure out what it is. It’s rich and spicy. One time I went looking all over his room for his cologne. I wanted to spray it all around my room. I wanted to tuck myself deep under the covers and go to sleep smelling Grandpa. Then when I woke up he’d be the first person I smelled too.

I couldn’t find it, though. I looked all over his room. I moved his shoes away from the door. I leaned the books down from the bookcase and peered at what was behind. I looked across the things on the window-sill: his watch, his wallet, an old hairbrush that I couldn’t believe was ever his. But I couldn’t find it. So I picked up his wallet and I held it to my nose and smelled it.

That’s how he found me, Grandpa did. He came through the door suddenly, wheezing. He was wearing my favourite green jumper of his. Mama gave it to him for Christmas last year.

“Temi, baby, what are you doing with my wallet?”

He didn’t look angry, so I smiled, relieved. I said I was looking for his cologne; I wanted to spray my room. At this, he laughed, a croaky laugh that made him cough, a big bad phlegmy cough, but I rushed to hug him all the same.

Grandpa lives alone with us now. He moved here when Grandma died, but I never did meet Grandma. She lived in Nigeria for the whole of her life, in a bungalow with a big orange courtyard. I have seen pictures of Grandma, though. Papa showed me. He came back from work one day with a huge shoebox. Me and Mama always tease him that his feet are so big he can’t find shoes anywhere. But he didn’t pull shoes out from the box. Instead, he pulled out a stack of photos. In the first one, I saw Papa himself. He was small and he had a little afro. He was wearing a long shirt with long sleeves but no collar, like the one my cousin Michael wore at my cousin Dara’s wedding. Next to him was a woman with eyes that looked like great big pieces of coal. She was beautiful. Her skin was smooth and as dark as mine. Her lips were round and full too. Her hair was encased in a wrapper. Papa said that’s her, that’s my grandmother.

When I saw Grandpa for the first time, I couldn’t wait to ask him about her. When he came to live with us, Papa picked him up from Heathrow. I waited for them at the front of the stairs, wearing my nicest blue dress. Mama had cooked my favourite meal: jollof rice, chicken, and do-do. We’d spent all day cleaning. I’d even got out the spray and removed all the dust I could from the piano in the hallway. Mama said that it would be nice for me to play something for Grandpa when he came, so I’d been practising.

But when Grandpa came through the door, I didn’t know what to say. I’d spoken to him on the phone before. His voice was full, almost like a roar. He sounded like what I thought a lion would sound like. I could always hear him better than Grandma; all the times that I’d spoken to her, her voice had been faint, and croaky, and I’d had to shout to get her to hear me. But when I saw Grandpa, I realised that he was thin. His hands looked bony, brittle. Papa had to help him move. His lips quivered as he spoke, and he didn’t sound anything like the voice on the phone. I didn’t ask about Grandma, not then.

But after Grandpa had lived with us for a few months, I did. I found him dozing alone in the living room one evening and showed him the picture Papa kept in his shoebox. I pressed my face to his belly when I heard him laugh.

“Whoa, child, this is well nigh fifty years ago, now.”

So he snuggled me in closer to him; I brought my feet up and tucked them together on my side on the couch. I asked him what he could tell me about Grandma.

He said that her father was a big man, bigger than Papa. He was scary, too, with fingers thicker than sausages and a big shaved head. He never smiled, he said, or at least he never saw him smile. When you shook his hand, you had to mind out or else your fingers got crushed. He’d hold the handshake too, and Lord help you if you didn’t immediately prostrate yourself before him when he entered the room. Really, he only shook hands with you if he liked the look of you.

“But what about Grandma?” I asked.

Grandpa said that when he was young, not much older than me, he was a builder, in Lagos. He built all kinds of things. Schools, hospitals, houses. People used to trust him because he was the best at what he did. He liked it, too. There was nothing quite like seeing a project get underway. Then, bit by bit, brick by brick, you’d see your vision come to life. The best part was when the first students came, or the first doctors and patients, or the first new family. Then you’d know that it was all worth it; it was a job well done.

“But what about Grandma!” I said.

Grandpa said that one day, a really hot day, he got a call; a new project was due. Someone wanted to build a new house for their family, somewhere down in Abeokuta. So he asked the man for his address; he said that if he lived closeby, he’d come over and they would discuss the specifications of the house further.

“What does specifications mean?” I asked.

“His needs; what he wanted the house to look like,” he said.

So Grandpa walked over. He said that all the roads were dusty, and you only had to walk along the road for a few moments, and sweat would be trickling down your spine and pooling all around your armpit. What made it worse was when you raised your hands, fresh trickles would race down the side of your torso and go all the way down to your hips. And flies would buzz around you and your eyes would get wet and sting, and any little thing, whether it was the cars locked in traffic that were constantly honking, or the people walking right at you who’d never move out of the way, or even just the slap of your sandals against the potholed pavement – anything and everything would irritate you. As if in solemn remembrance of this, he brought his hand up to the side of his neck and massaged it.

“So where was Grandma? Was she at the house?”

Grandpa said that he walked alongside the traffic for over twenty minutes. Lagos was still not as busy then though as it is now. He said that he bought two pieces of roasted corn along the way, on the roadside; one to eat then, one to have on his walk back to the building site.

He said that when he got to the house, he’d never seen a grander-looking place. The door had pillars beside it, great white pillars with green vines growing around them. There was a red car parked in front, and, now that the sounds of the roads and the traffic had died down, over the quiet chatter of the guards and the gateman seated around the walls of the courtyard, over the scrape of their chairs and their cries as they slapped down their cards onto the little round table before them, over all of this, he could hear my grandmother singing.

He paused here. He took out a little handkerchief from his breast-pocket and, looking around the empty living room, he brought one shuddering hand up to his nose, and wiped it softly. I tilted my head up from his chest and looked pointedly at him. Finally, he continued.

“It was a simple song really,” he said. “A church song. I’d heard it before…many times before. But when she sang it-”

“How does it go?” I asked. He started singing:

“That was all it was,” he said. “But she had a voice, your Grandma did. It was really something. You should have heard her. I was surprised; I expected all the men and women in the compounds around her would have been scaling the fences, all the walls, to see her, to listen. I know that if I was her neighbour, that’s what I would have done. I couldn’t believe the gateman and the guards were just sitting there, playing cards. I wanted to smack their heads together, shout at them, yell at them.”

“I had to find the voice. It struck me like a good blow to the head. It was piercing, but gentle, soft. Like water. Imagine, Temi, you’ve been in the desert for a long time. Imagine you’ve been wandering, your feet are sore, heavy. You think you’re about to pass out, even die. Then you find a spring. You don’t believe it at first; it’s a mirage, right? But you get closer, and closer, and there it is alright, right there, somehow, surrounded by all this lush vegetation.”

“Yes, like the garden,” he said. “And then when you get there, once you push your way up under the heavy leaves, once you scoop out a handful of water, clear clear water, you bring it to your lips, you taste it. The most dangerous thing in the world then, water. All your troubles laid to rest. Every sore and ache gone. That’s when you don’t even want all those sugary drinks you kids be drinking. That’s when all you want is that good old water. That’s what I had, that day, when I heard your grandmother sing. That’s what I enjoyed, what I had for sixty odd years.”

“So how can I get this water?”

He hugged me close. I smelled his rich cologne again, and buried my face in his shirt, filling my nose with it. Then he spoke.

“Shoot, child, don’t you worry. You already have it.”

Ifedolapo Apampa was born in the UK to Nigerian parents. He grew up in Hertfordshire, Bedfordshire, and Kent, and now lives in London. He enjoys reading. And writing.